GET THE QUICK START KIT!

Any tool is PERFECT to get started, but the Quick Start Kit gives you EVERYTHING you need for every Blaster technique!

By loggin in I confirm that I have read and agree to the privacy policy and terms and conditions and that I am over the age of 18.

By registering I confirm that I have read and agree to the privacy policy and terms and conditions and that I am over the age of 18.

THESE ARE THE INITIAL FINDINGS FROM A 3RD PARTY STUDY CURRENTLY IN THE PEER REVIEW PROCESS. STAY TUNED!

THE ARTICLE AT A GLANCE:

Scientific researchers conducted a FasciaBlaster study with 43 women over a 90-day period.
The at-home FasciaBlaster protocol was to warm up for approximately 20 minutes in a sauna, apply the Blaster Oil®, FasciaBlast each leg for 20 minutes and the abdominals for five minutes, then perform isometric contractions. The protocol was followed five days a week, with a rest day every two days.

- A reduction in subcutaneous fat (SAT)

- An increase in the resting metabolic rate (RMR)

- A decrease in systemic inflammation (CRP)

- An increase in collagen production (PICP)

- An increase in Irisin

- Safety markers showed no stress on the internal organs or systems

In late 2016, designed protocols for the first formal FasciaBlaster device study in Tampa, Florida. Third-party scientists at the Applied Science and Performance Institute (ASPI) researched under the direction of Jacob Wilson, Ph.D. who was awarded the NSCAʼs Terry J. Housh Outstanding Young Investigator of the Year award in 2013 and boasts over 500 peer-reviewed published studies.

A total of 43 women volunteered to participate in the 90-day study, with 33 women in the FasciaBlaster protocol group and ten serving as a control group. All subjects were between 25-60 years old, had a Body Mass Index of 20-30 kg/m2, were non-habitual caffeine users, did not use weight loss supplements, and had visible cellulite on the thighs. All subjects were baseline tested with blood analysis, ultrasounds, DEXA scans, and metabolic testing. Testing was done at Baseline (Day 0), and weeks 4, 8, and 12, and visual photography was assessed in the protocol group.

After baseline testing was established, all FasciaBlaster protocol subjects were instructed to complete a 90-day, at home protocol using the FasciaBlaster devices. The devices used were the FasciaBlaster®, Mini2TM, and FaceBlasterTM. The protocol consisted of warming up for approximately 20 minutes in a personal sauna that was provided to each subject. Following the warming of the tissue, each subject used Ashley Blackʼs Blaster Oil on their skin and used the FasciaBlaster devices of their choice for 20 minutes on each leg and 5 minutes on the abdominals for a total of 45 minutes. Subjects then isometrically contracted the targeted area following device use.

Subjects were instructed to perform the protocol five days per week, but no more than two consecutive days. They were also instructed not to change their diet or exercise regimens and to go about their daily lives as usual. The controled group was asked to only use the Blaster Oil on the skin 5x/week throughout the study.

Instructional videos, personalized coaching, and opportunities to ask questions were available to all subjects for the duration of the study.

Ultrasound imaging was used in this study to evaluate the subcutaneous fascial architecture and measure the Subcutaneous Adipose Tissue (SAT). Ultrasound evidence indicated a reduction of subcutaneous fat (Table 1), as well as a visible smoothing of the fascial tissue. 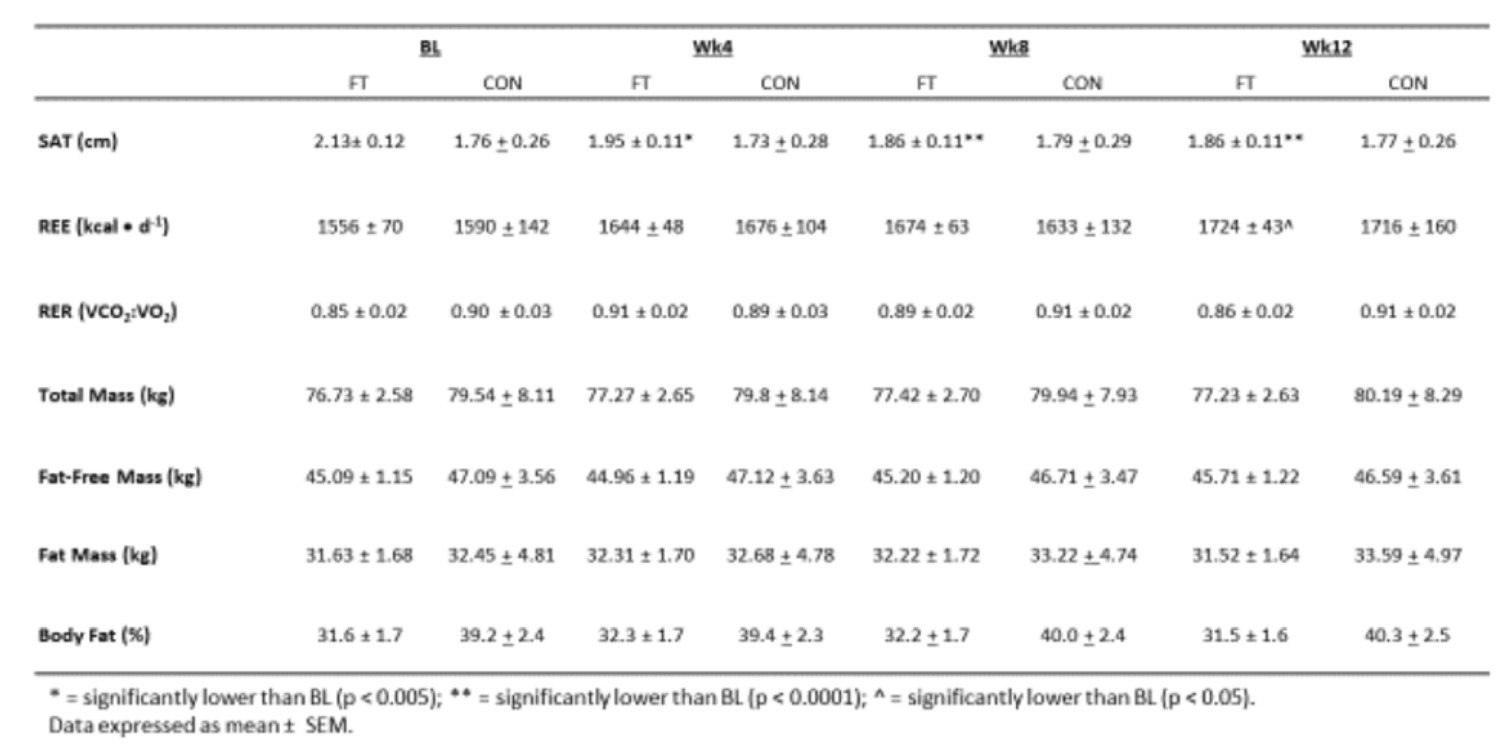 The results shown in Table 1 showed no significant changes in Total mass (kg), Fat-free mass (kg), Fat mass (kg), and Body Fat (%). This data indicates that fat reduction was occurring locally at the targeted areas (thighs) without having a dramatic impact on overall body composition measures.

Here are the ultrasound image results from two women from the study.

The reason for testing the blood is so significant is because blood results show what is happening systemically and affecting the entire body. So, for example, even though the subjects only FasciaBlasted their thighs and abdomen, these results were seen all throughout their body.

1. A DECREASE IN C-REACTIVE PROTEIN

C-Reactive Protein (CRP) is a hematological marker for inflammation that is synthesized by the liver in response to cytokines released by damaged tissue. CRP levels decreased throughout the study.

2. AN INCREASE IN IRISIN PRODUCTION

Irisin is known as the “exercise hormone” and is released in the blood after moderate to high-intensity training to help convert calorie-storing white adipose tissue (WAT) to brown adipose tissue (BAT), which burn energy, produce heat, and are packed with mitochondria. This results in more calories burned and an improvement in fat loss. Irisin levels increased and remained ele- vated throughout the study.

4. SAFETY MEASUREMENTS SHOWED NO STRESS ON INTERNAL ORGANS OR SYSTEMS.

Measurements of AST, ALT, and BUN enzymes showed no changes, indicating there was no over-stress on the body.

Study results showed the RMR increased throughout the study, and by Day 90, showed an average increase of 168 kcal/day, indicating that more calories were needed and used in order to maintain body weight and other functions. This helps explain the decrease in the subcutaneous adipose tissue that was seen in the ultrasound images.

Metabolic testing was conducted on an indirect calorimeter for approximately 15 minutes in a quiet, lit room, while subjects breathed normally into a mouthpiece with a nose clip in place. Calibration took place prior to each individual test (this process is automated as the device contains barometric, temperature, and humidity sensors in addition to the oxygen and flowmeter sensors). All test subjects were instructed to avoid consuming anything - including any caffeine or stimulants that could alter REE and respiratory exchange ratio (RER) - 12 hours prior to testing.

Photography results of each subjectʼs thigh cellulite were assessed in order to see if visual improvements were made. In order to provide an objective measurement to a subjective result, a scale was created called the “Black Cellulite Severity Scale” (BCSS) that consisted of two separate technicians - one male and one female - both blinded to the source of the photographs. They were asked to assess the degree of cellulite in the photos of all test subjects and rate the degree of cellulite on a five-point analog scale in order to objectively measure changes in the appearance of cellulite. Both blinded testers noted a visual im- provement in the appearance of cellulite (measurable results are shown below in Table 2).

HERE ARE THREE BEFORE & AFTER IMAGES OF ONE SUBJECT FROM THE STUDY.

Scroll through the images below, or click here to view the full gallery. 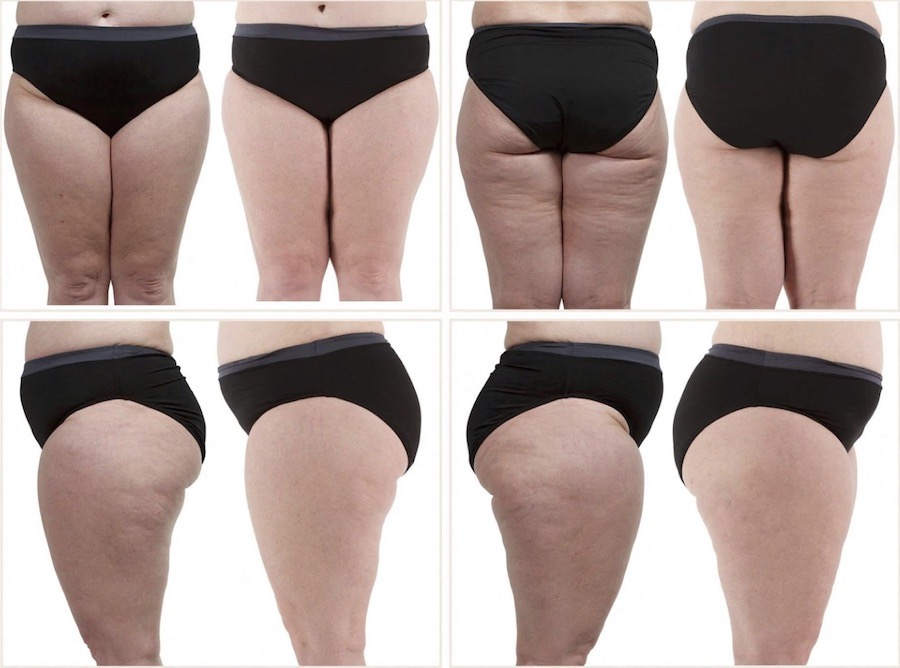 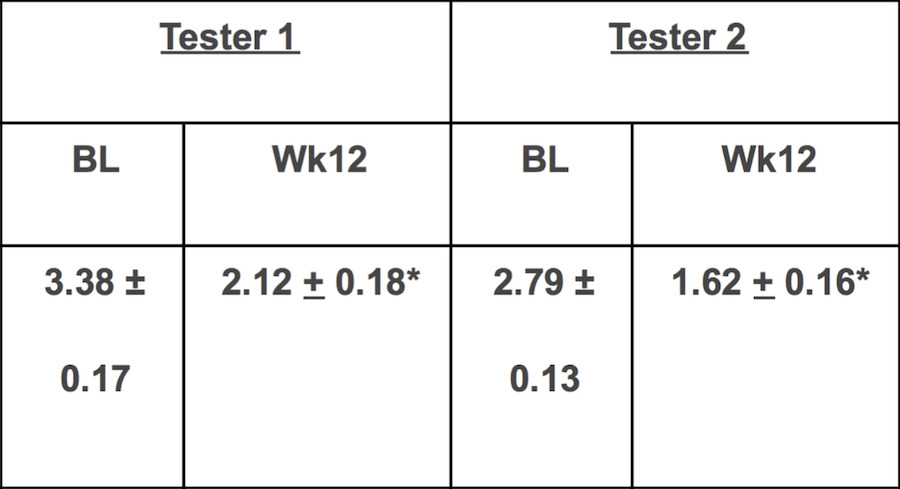 The scoring was as follows:

1 - minimal dimpling or appearance of cellulite

2 - slight dimpling or appearance of cellulite

3 - moderate dimpling or appearance of cellulite

4 - significant dimpling or appearance of cellulite

5 - severe dimpling or appearance of cellulite.*

If you are a student, researcher, University representative, or other practitioners that is interested in conducting research with the FasciaBlaster devices, please email Research@AshleyBlackGuru.com. We are happy to provide the devices, the protocols and coaching on best practices so that the research will be as accurate as possible and we can continue to advance the science of FasciologyTM.

CHECK OUT ALL OUR FASCIABLASTER PRODUCTS!